The store will not work correctly in the case when cookies are disabled.

When world-renowned horse trainer and clinician Julie Goodnight started shopping for a boat she could eventually live aboard in New Smyrna Beach, Florida, near her native Orlando, she knew exactly what she wanted — a Silverton Motoryacht 453.

That model had been built for just five years starting in 1999, making the boats Goodnight was looking at in late 2021 roughly 20 years old. So she was very particular about condition, usage and ownership history. Ideally, she wanted a boat that had seen little or no saltwater use.

"although the boat was well maintained, its systems hadn’t been updated at all over its 20-year life. "

She finally found what she was looking for in December — a low-hour 2001 model that had spent its entire life on Missouri’s Lake of the Ozarks. Goodnight got a great deal on the boat, she says, in part because it was landlocked and also in part because, although the boat was well maintained, its systems hadn’t been updated at all over its 20-year life.

Neither issue bothered Goodnight, who says the price was good enough to offset the cost of having the boat, which she named Legasea, trucked overland to the Mississippi River at St. Louis. As for updating systems, she relished the challenge of rigging and equipping Legasea for the long trip down the Mississippi and around the Florida peninsula to New Smyrna Beach.

Extra Space After an Electronics Update

Goodnight’s first project was upgrading Legasea’s dated electronics — which she says “looked like something out of ‘Lost in Space’” — with a modern multifunction display combining sonar, GPS/chartplotter and radar. As usually happens when replacing older standalone units with newer integrated equipment, the project left several unused cutouts in the dash, which Goodnight’s installer covered with black-painted aluminum plates

An Opportunity for Functional Storage

In those plates, Goodnight saw an opportunity to create functional storage for the kind of odds and ends that always seem to end up in cup holders or sitting loose on surfaces around the helm — phones, eyeglasses, glasses cleaners, binoculars, notepad and pen, multi-key, etc.

She had previously ordered parts from Boat Outfitters for a different boat, so she carefully measured and photographed the unused cutouts in Legasea’s dash, came up with a tentative plan for how to make use of them, and contacted Theo, the Boat Outfitters project manager she had worked with before. 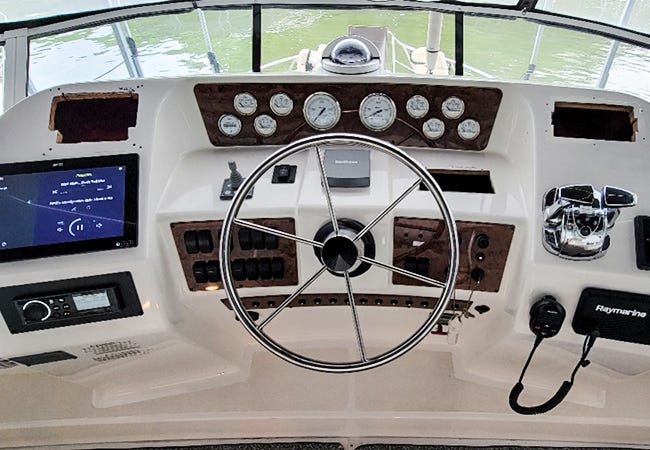 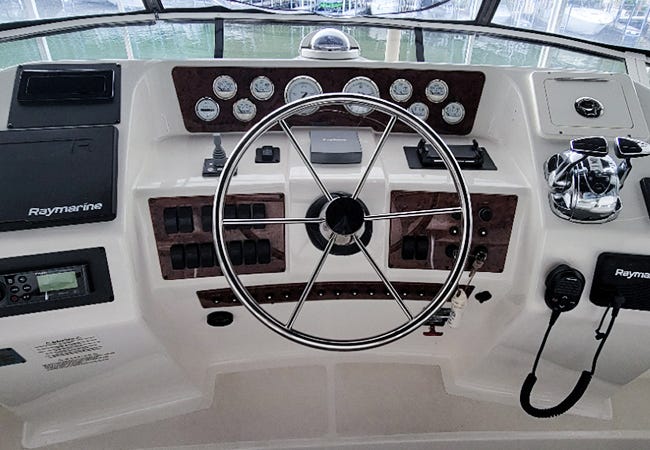 After discussing the project with Theo, Goodnight settled instead on a locking glove box at upper right, an acrylic catch-all box at upper left, and a phone charger/holder closest to the wheel. Lockable storage at the helm, she says, will be a great addition, and the box can also hold binoculars while underway.

New components for Legasea’s helm included a black Acrylic Catch-All Storage Box, a ROKK Waterproof Wireless Phone Charger, and a custom Boat Outfitters Build Your Own Glove Box. The glove box was a “Build Your Own” product, built specially to fit Legasea’s helm. With Theo’s guidance, Goodnight was able to maximize available space by slightly enlarging the existing cutout to accommodate a larger box. Boat Outfitters also researched the original Silverton gelcoat color and built the glove box from a color of Starboard that Goodnight says is a near-perfect match.

Goodnight did the installation work herself with the exception of having appropriately sized openings cut in the aluminum plates covering the holes where the catch-all and phone charger went. To maximize storage, the glove box was ordered larger than the existing cutout and required enlarging the cutout with a drill and jigsaw (left). The catch-all box (center) was installed as recommended with only an adhesive sealant and no mechanical fasteners. The phone charger (right) was screwed to the existing aluminum plate with four small self-tapping screws. Elastomeric sealant — which Boat Outfitters recommends instead of polyurethane or polysulfide for most installations — was used throughout.

Goodnight and her husband installed all three pieces themselves after getting the electronics installer to cut appropriately sized openings for the cubby and phone charger in the metal plates covering the old holes. “Any do-it-yourselfer would have no trouble,” she says. “We used a jigsaw to enlarge the old cutout for the glove box and other than all it took was a screwdriver.” They sealed the glove box flange with a special elastomeric sealant, which is recommended by Boat Outfitters for use with Starboard.

"The project, says Goognight, has made Legasea’s helm station much more functional. "

The project, says Goognight, has made Legasea’s helm station much more functional. The glove box accommodates binoculars when underway and also provides locking storage for valuables. The charger keeps her phone secure, charged, and easily visible. The catch-all to port is perfect for odds and ends like reading glasses, multi-key, notepad and pen, etc.

What’s next? Legasea will spend the winter in St. Louis while Goodnight makes further upgrades and irons out a few mechanical issues, then likely head south with the warmer weather. Traveling steadily, Goodnight says, it’s an approximately 40-day trip to New Smyrna. Chances are, though, that she’ll take it slow and savor the journey. “This is my dream come true,” she says.